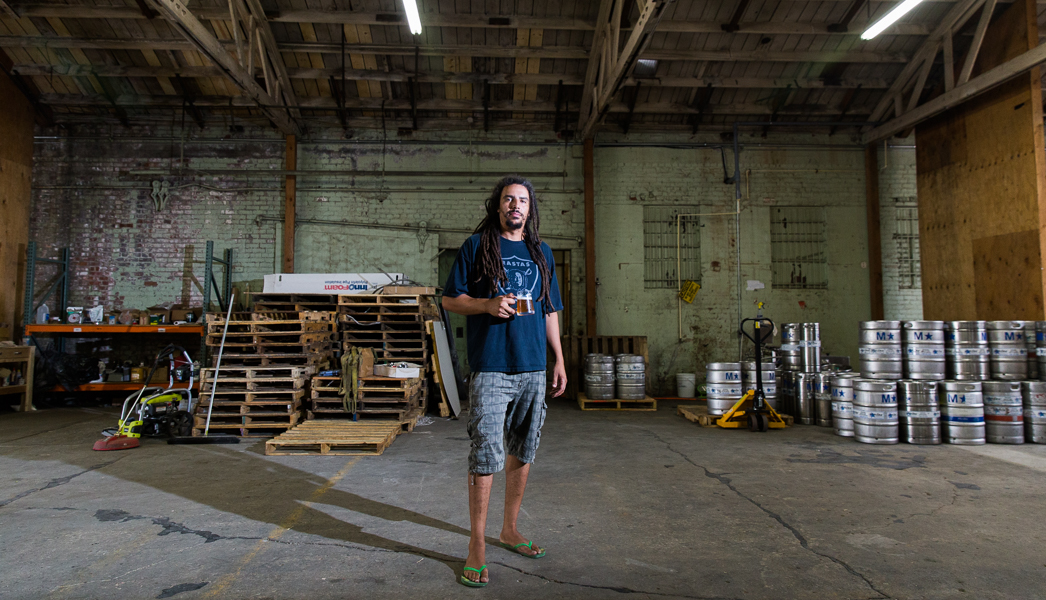 Note: This article appears in the August issue of Beer Paper LA. Check out the print edition!

This city is, without question, in a period of immense change. Across the greater Los Angeles area, neighborhoods are being reshaped to meet the demands of a growing upper-middle class demographic. There is perhaps no better example of this swing than Downtown and the neighboring Arts District, which has seen a major surge in development over the past five to ten years. Most often defined by upscale coffee shops and fine dining establishments that dot these evolving neighborhoods, a new trend is emerging in the Arts District. Thanks to an interesting mash up of industrially zoned space mixed in tightly with residential, this graffiti-clad community has become a uniquely viable hot spot for Los Angeles breweries to set up shop.

The Arts District can boast at least four new breweries within its boundaries, which stretches between East of Little Tokyo and West of the LA River. This, of course, does not count longtime resident Angel City Brewing, which has operated in the area since late 2010. The Arts District will soon make for a perfect walking tour; every brewery is within a mile and a half of each other. The new four are either currently open or under construction with hopes of opening to the public before 2016. Each has been at least two and a half years in the making, promising that this fall and winter will be a period when fans can finally see the fruits of their collective labor come to light. In other words, the Arts District is about to blow up with beer. 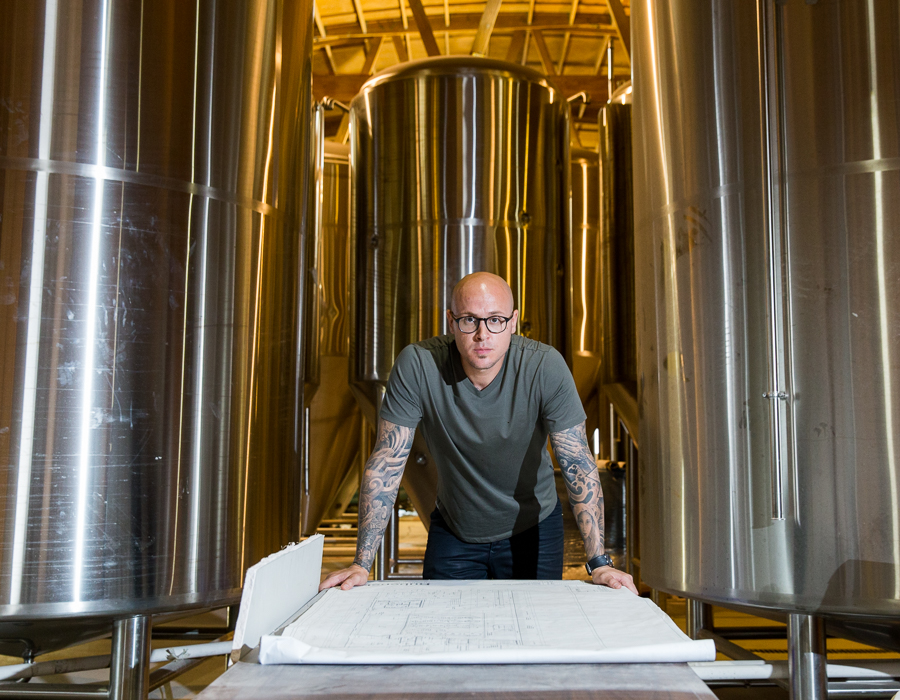 Iron Triangle is perhaps the most ambitious of the new four, starting with over 10,000 square feet currently under construction, which will quickly turn into at least 30,000 square feet with the acquisition of the next-door property. Iron Triangle hopes to stand out from their neighbors with an IPA focused brewery and both a barrel aged and sour program to boot. “I plan to do 1,200 barrels this year, and we plan to do 5,000 barrels the next year, and 10,000 barrels the year after that,” says owner Nathan Cole. Cole also says Tyler King, former head brewer at The Bruery (now starting Brewery Rex) has assisted as a consultant. Current plans place a public opening in September or October.

Boomtown Brewery is another location with grand plans for their property, utilizing 18,000 square feet over three buildings with a large tasting room and even larger private event space. Boomtown will focus on old world, unfiltered beers that pack a punch of flavor while ending clean and dry. Head brewer Samuel “Chewy” Chawinga, formerly of LA gastropub Stout, will oversee operations. “We break all our water down and build it back up so each beer has its own water profile.” Says Chawinga about his beer, “we don’t filter; we let time do its thing… A lot of people confuse unfiltered beer with muddled flavors, but that’s not how it has to be.” Boomtown hopes to have their tasting room open by the fall, with private events now happening weekly.

Both Iron Triangle and Boomtown Brewery say their primary focus will be reaching the Los Angeles market before trying to expand distribution elsewhere. 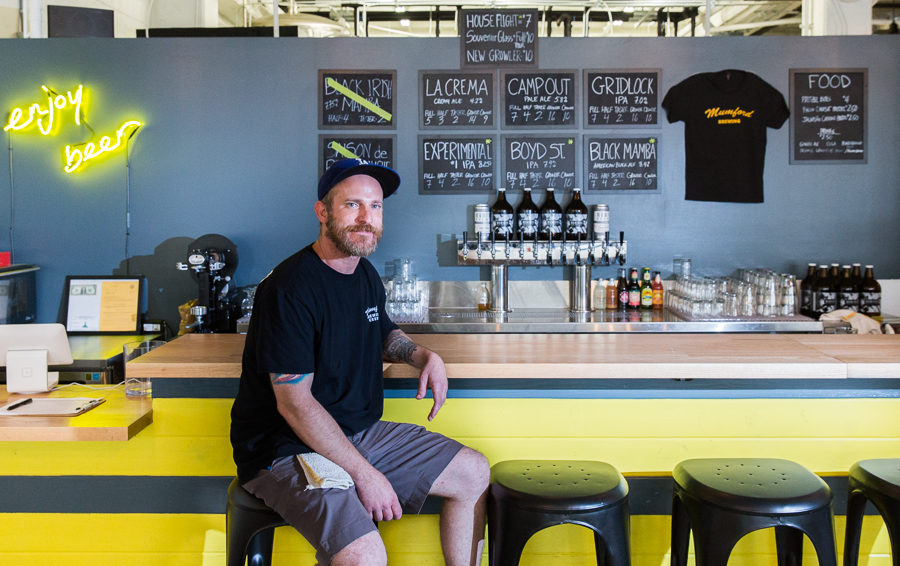 Mumford Brewing follows a smaller, tasting room-centric model. Brothers Todd and Peter Mumford, (Peter, head brewer, has a background in winemaking in Napa) along with Todd’s wife Tien Tran, have created a family-focused bright and modern tasting environment perfect for a daytime outing. Open since mid-June, they are currently self-distributed to a limited number of accounts, and as a consequence the best place to try their beer might just be at their tasting room (and you can take a Crowler home with you as well). “Our beer is American focused, and we’re starting to add on to that with more Belgian styles as well,” says brewer Peter Mumford. “Those are the two beer types we find ourselves drawn to. We want to make beers that we’ll drink on a regular basis.” Mumford Brewing, like Boomtown, has a 15-barrel system behind them, so fans can hope to see larger quantities of flagship beers like Mumford’s Black Mamba, an American Black Ale, hitting LA sooner than later.

Last but not least, Arts District Brewing Company made waves in April by bringing on award winning Pizza Port brewer Devon Randall. While plans for the brewery have still not been made public, (Arts District Brewing declined an interview for this article) according to an LA Weekly article by Sarah Bennett on Randall’s move, 213 Hospitality, the company responsible for Arts District Brewing has, “applied for permits to convert its 17,000 square foot building on Traction Avenue into a pizza-slinging brewpub with 27 skeeball lanes.” 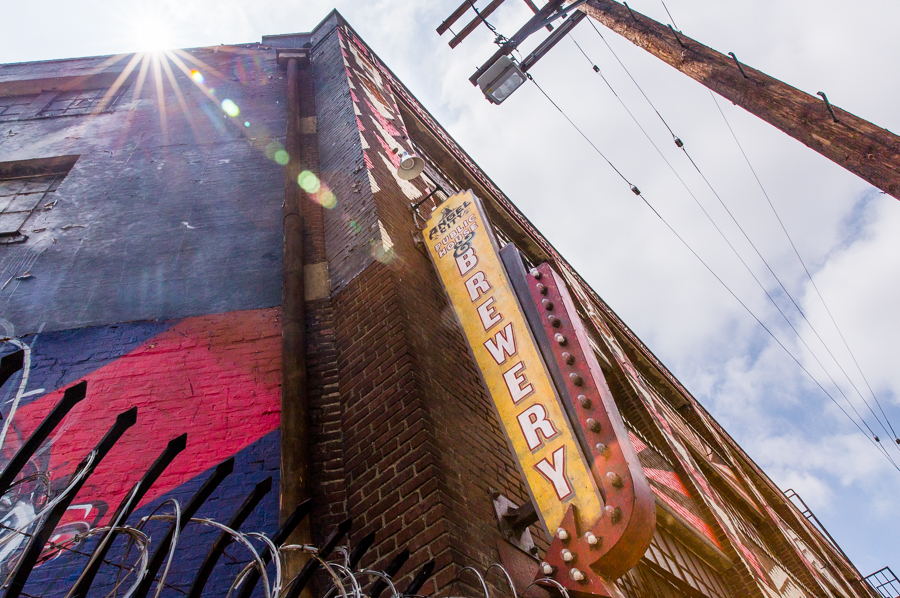 Several factors have made the Arts District an appealing destination for breweries to purchase property. The area is bursting with creativity, craft-oriented businesses, and development as far as the eye can see. “I just didn’t want to be anywhere, I wanted to be somewhere specific, and to me the best place to open a brewery is in the Arts District,” says Iron Triangle’s Nathan Cole. “I like the neighborhood and what’s going on over here. Legal graffiti, really artistic people, I’m surrounded by a great group of business owners… which also helps my business.” Indeed, the artistic segment of the Arts District seems to be alive and well, impacting the décor of the businesses themselves. Mumford Brewing has a wall of their tasting room painted by acclaimed LA-based street artist Kofie. “Our building is covered in a mural by an artist from Portugal,” says Peter Mumford, “so there’s always been that culture here.” 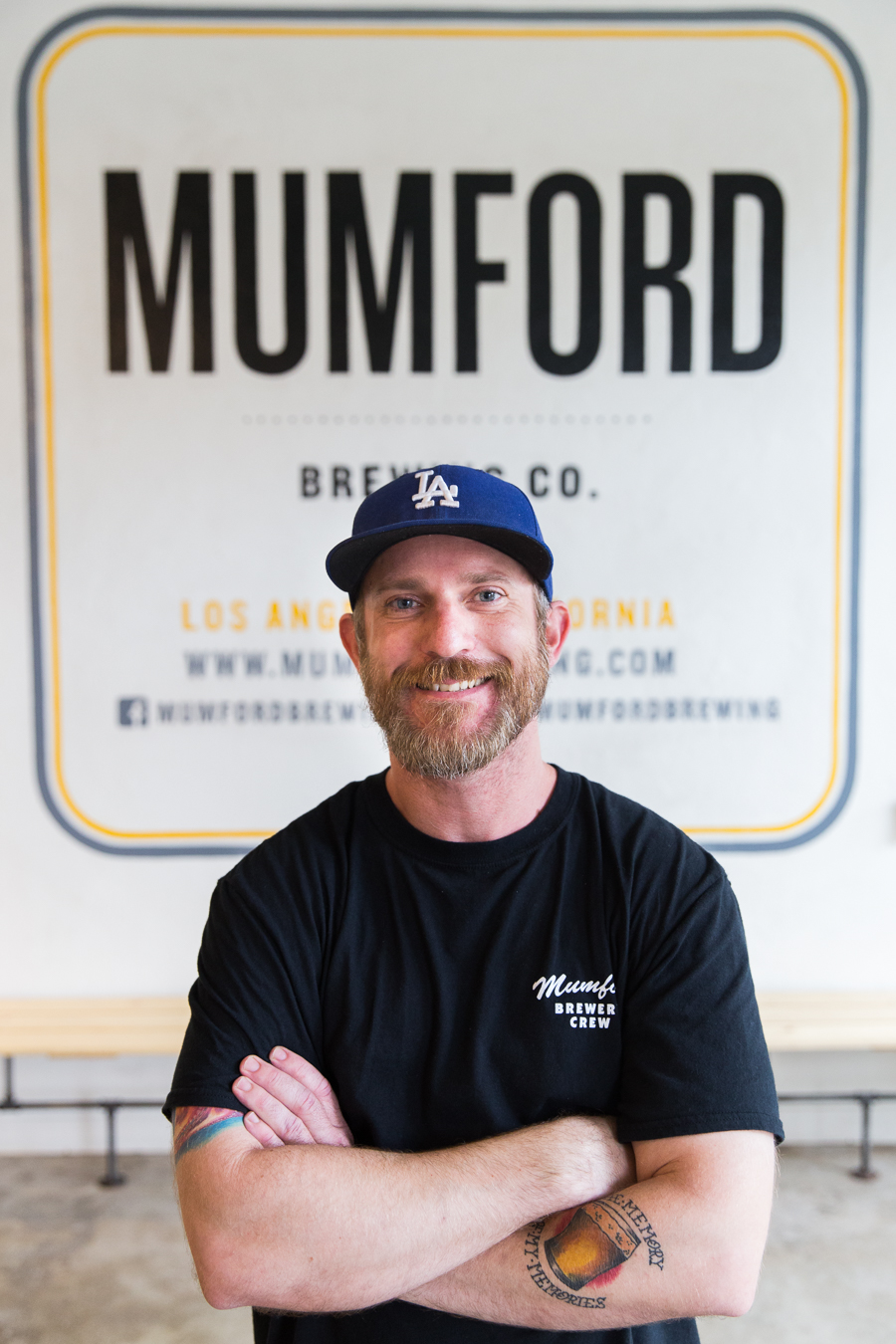 Culture aside, the eclectic mix of industrial-meets-residential means that manufacturing facilities, like breweries, have found a relative safe-haven from the perceived hardships of LA city governance, thanks in large part to city zoning. “The biggest thing for us was the zoning,” says Peter Mumford. “This area is zoned for manufacturing, so it was ideal for opening a brewery. We didn’t have to jump through as many hoops since we’re manufacturing and just happen to have a tasting room, so it’s a great California law.” Of course, Mumford’s experience wasn’t without its pitfalls, and as a relatively new industry to the area, city government oftentimes has a hard time working with breweries. “They didn’t know where to categorize us,” says Mumford. “There were definite challenges but they would work with you.”

“In dealing with the city that didn’t know much about breweries in general we’d get different answers from different people we’d talk to,” says Boomtown’s Samuel Chawinga. “Finally we got all the department heads together and if we wanted a production brewery we had to be in Industrial Zones 2 or 3… The Arts District was the area I wanted to be in the most… We wanted to have a place where people would be safe and be willing to drive. Now it’s a really safe area… we’re happy to be where we’re at.”

City government was not the only challenge to these potential breweries, though, as explained by Iron Triangle’s Nathan Cole. “For me it was quite difficult… but we’re in a sensitive area. Dealing with the Los Angeles River Artists & Business Association (LARABA) or other groups associated with the Arts District, you almost have to go through those to get local support before you can get to City Council.” Cole explained that LARABA was a group of business owners and developers “trying to flush out concepts that are trying to come in here that aren’t what this place is planned to be. They want to hear what your plans are, your concept, how it will impact [the community].”

With a rapidly changing neighborhood already upon them, groups like LARABA, along with local residents and business owners, will be seeing an increase in foot traffic regardless of how tightly they can control growth. This speaks to both the increased popularity of the area as well as its safety record. “The Downtown area is where the city is pushing everybody, and the most desirable area right now is the Arts District,” says Boomtown’s Samuel Chawinga. “Once the LA River Project finishes up, and the new train depot comes in, you’ll have straight access from Santa Monica and Hollywood. It’s going to help out this section of town immensely.” 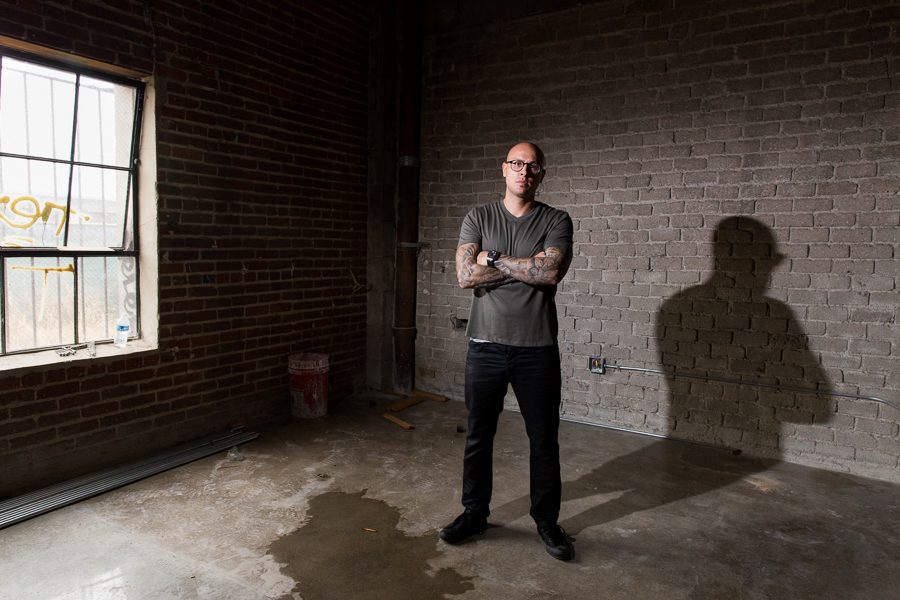 “It’s becoming a destination spot,” says Peter Mumford. “People traveling from outside of the city know this is an area I can go, walk around, and see many different places, instead of going to one place and having to get back in your car. In a mile I could walk to four other breweries that are going to be open, because there are more people walking around and it’s much safer than a decade ago.” 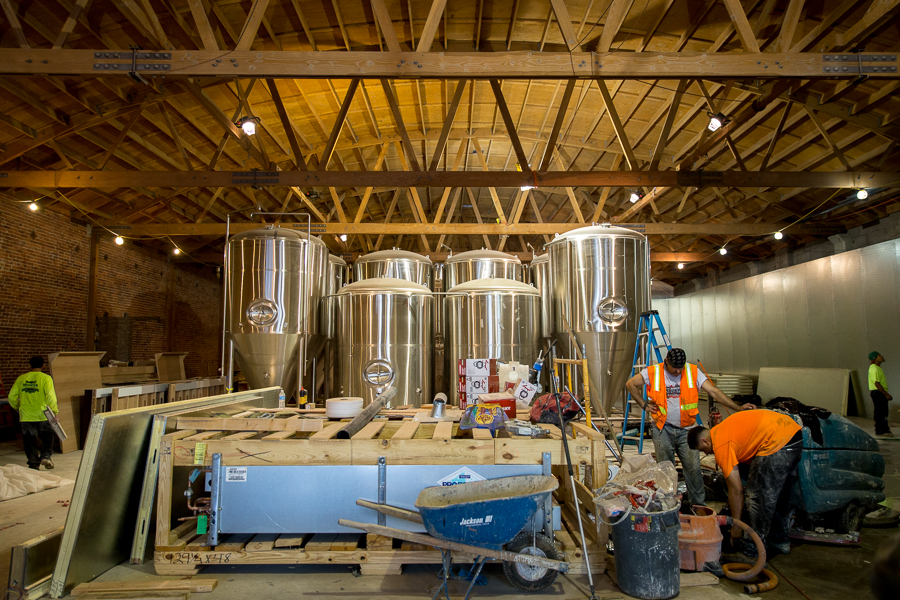 This small patch of Los Angeles is not nearly the only beer-growth the City of Los Angeles is seeing. Just across the LA River in Boyle Heights, Dry River Brewing and Indie Brewing Company are also set to open their doors for business by next year. And within the Arts District’s own borders, Belgian beer restaurants like Wurstküche and Little Bear continue as popular destinations, and Far Bar is just a stone’s throw away in Little Tokyo. In Downtown proper, gastropub and beer bar Barrel Down recently opened its doors on Seventh Street and Grand. 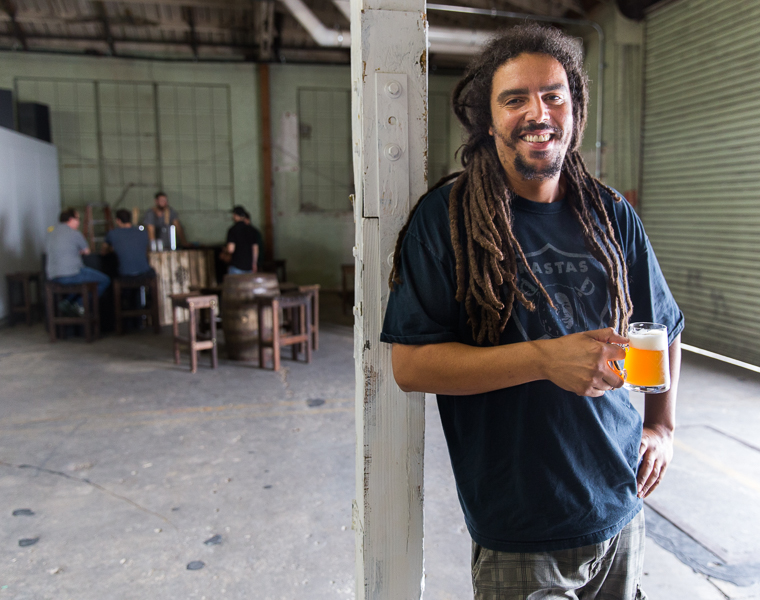 When asked if LA was ready for this influx of beer, each person interviewed for this article offered an emphatic yes. “LA County is the biggest beer market in the United States,” says Boomtown’s Samuel Chawinga. “There’s a reason there’s both a Budweiser and a Miller/Coors brewery in town. You go to beer bars and it’s still San Diego heavy; their beer culture is far ahead of us. But in LA people do things right, people have money to back people who know what they’re doing, and once the wheels grab hold it will take off quickly.”

While these breweries will have plenty to celebrate this fall with multiple grand openings, they’d be wise to remember that it’s quality, not square footage or production volume that will keep them viable and promote the reputation of LA beer. Areas like the South Bay have gained a well-deserved reputation for high quality brews, and it’s up to this new wave of breweries to see this trend through. Here’s to trying them all and finding out for ourselves.

Want to join the discussion?
Feel free to contribute!